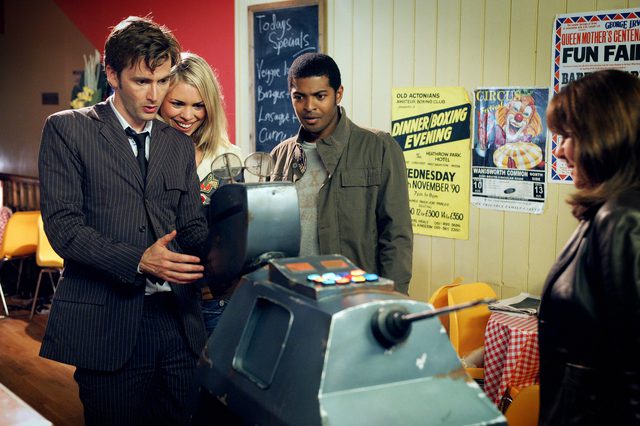 Picture shows:- DAVID TENNANT as The Doctor, BILLIE PIPER as Rose, NOEL CLARKE as Mickey, ELISABETH SLADEN as Sarah Jane Smith and K9 BBC ONE: Saturday April 29th, 2006 After a tip-off from Mickey (Noel Clarke) about suspicious goings on in a local school, The Doctor (David Tennant) and Rose (Billie Piper) go undercover to investigate. However, also doing her own investiagtion is The Doctor's old companion, Sarah Jane Smith (Elisabeth Sladen) together with her trusty K9. Whilst Sarah Jane and The Doctor get reaquainted, Rose is less than thrilled with the sudden rivalry, but together with Mickey the four set out to discover the truth about the mysterious headmaster, Finch (Anthony Head) and his strange curriculum he is infiltrating throughout his school... Warning: Use of this copyright image is subject to Terms of Use of BBC Digital Picture Service. In particular, this image may only be used during the publicity period for the purpose of publicising 'Doctor Who' and provided the BBC is credited. Any use of this image on the internet or for any other purpose whatsoever, including advertising or other commercial uses, requires the prior written approval of the BBC.